What New Jersey Tells Us About Polling and Its Nature 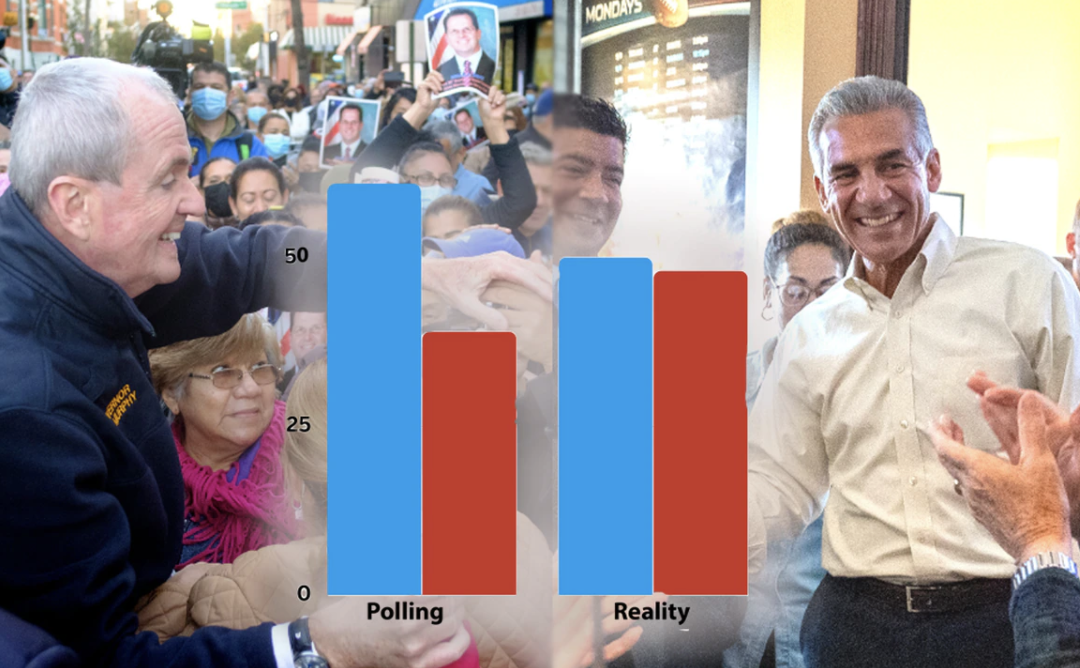 Recently, the Virginia and New Jersey off-year governor race have been capturing the nation’s attention. Contrasted to the results of the 2020 Presidential Election results, Virginia turned its back on Democrats with Glenn Youngkin, the Republican candidate for governor, winning over Democrats across every demographic group. Similarly, although victorious, the Democrats only won by a narrow margin of 2.3 points with incumbent Gov. Phil Murphy in New Jersey over Republican candidate Jack Ciattarelli. There may be numerous explanations for a revival of support for Republicans in this election, such as the slow process in Congress in passing the new infrastructure bill or Biden’s decision on Afghanistan earlier in August. However, the governor’s race, specifically the New Jersey race, reveals further a long-existing problem in American politics––the impacts of polling mistakes and inaccuracy.

According to the polls conducted by Monmouth University Polling Institute, renowned for its election polling in the past, Murphy was projected to win by nearly 8 points. In reality, the polls missed by 5 points, whereas an expected sampling error is normally around 3 points. Ciattarelli was in fact a lot closer to winning than predicted. Patrick Murray, director of the Monmouth University Polling Institute, issued a public apology:

“I blew it. The final Monmouth University Poll margin did not provide an accurate picture of the state of the governor’s race. So, if you are a Republican who believes the polls cost Ciattarelli an upset victory or a Democrat who feels we lulled your base into complacency, feel free to vent. I hear you.”

As Murray writes, polling mistakes have real-world implications. Although the psychological aspects of individual voters can never be known, it is certain that polling numbers may influence a voter’s decision. When a Republican voter sees Murphy’s lead in the governor’s race, that voter may feel that his support for Ciattarelli is insignificant. That person would feel that there is little efficacy in casting a vote. Therefore, the person would feel that voting for Ciattarelli is a waste of time and effort, as the vote is not going to bring Ciattarelli victory when Murphy is 8 points ahead.

Polling mistakes in recent elections are not rare. In fact, all polls have errors––no small sample can completely reflect and replicate a larger voting population of millions of Americans. However, the real problem lies with the fact that polls impact the decisions of political candidates. For instance, recent polls greatly favor Democrats, producing misleading results. In 2016, the polls predicted that Trump would lose the presidential election by 2 points to Clinton, when in reality Trump took the electoral victory. Similarly, in 2020, the polls again underestimated the Republican strength in the presidential election. This occurred due to the polls being a lot less representative of the national voting population. The polls misjudged the late-deciding voters and underestimated the opinions of people without college degrees. These two groups just so happened to lean Republican, resulting in the polls optimistic views on Democrats winning. However, these methodological mistakes greatly impacted the election. In the 2020 elections, because the polls did not favor Trump in Michigan and Wisconsin, Trump cancelled his campaigning in these two key battleground states. The optimistic poll numbers to Biden in Ohio also led to him spending extra campaign funds on a state that he eventually lost. Polls, although only projections and do not represent final results, still largely influence the decisions of voters and candidates. Had Trump not taken polling numbers into consideration and decided to spend more efforts campaigning in Michigan and Wisconsin, the 2020 election might have turned out differently.

Polls being misleading is only one of its problems that has been exposed since its invention by George Gallup in 1932. Political scientists also argue that polls make the general public focus solely on the horse race between candidates instead of specific policies that will better inform them. Polls also discourage political leaders from making up their own minds, as they feel more compelled to listen only to the public’s opinion (this can be hazardous, as bold leadership can often lift people out of outdated ideologies as JFK’s did during the Civil Rights Movement in the 20th century). Today’s public generally views polling as a negative linkage institution, with only less than 6 percent of participants asked willing to participate in polls. In his apology, Murray even casts doubt on the necessity of future polling by stating that “[pollsters] have a responsibility to consider whether releasing horse race numbers in close proximity to an election is making a positive or negative contribution to the political discourse.” The New Jersey governor’s race created new doubts on an already problematic institution of polling. The question thus remains: being problematic as it is, do we still need polls in the future?