“Two in Four People are Jewish” 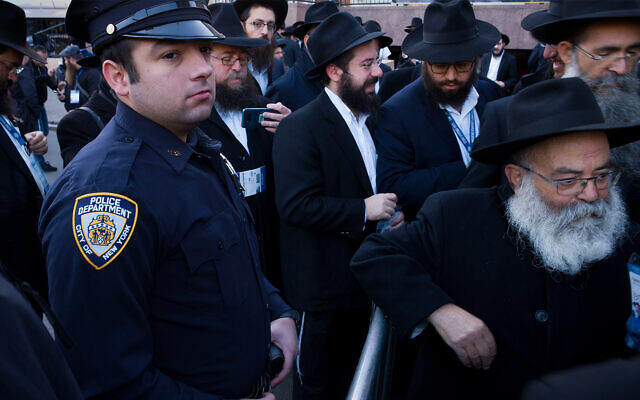 “Two in four people in Brooklyn are Jewish”; that is not a definite fact, but it’s a figure of speech my grandmother claims to be true. She repeats this phrase as a hope, as a reminder, as a prayer, as if in some way saying it makes it true. And as she says it, the words resonate with my family because it reminds us of our history, our future, and our present.

It is definitely a fact that there is a substantial Jewish population in New York City, greater than that of Boston. However, anti-semitic acts of violence persist. In 2019 alone, hate crimes against Jews increased 21%, many of those attacks occurring in the last weeks of the year and into 2020. Some officials tie the rise in violence to the Jewish holiday Hanukkah, but many say it’s just the start of an immense increase in anti-semitism. Below are only some of the attacks in late 2019 and early 2020.

On December tenth, a couple opened fire on a kosher market in Jersey City- five were killed, including the two attackers.

Later, a 56 year-old Jewish man was punched in the head after being confronted by a group of people. Thirty minutes later, the same group initiated contact with a 23 year-old man, first striking him with a chair and later punching him in the face.

In Monsey NY, five innocent people were stabbed at a Rabbi’s house just before lighting the Hanukkah candles, luckily no one was killed.

New Years day 2020– two women verbally and physically harassed a Hasidic Jewish man in the streets of Brooklyn- later, they were both arrested.

Finally, January 11, anti-semitic graffiti in the stair-well at a Brooklyn highschool was reported to the police- no arrests have been made yet for this hate crime.

Beyond these examples, there were many more I found of the same caliber. All horrible, violent, and defamatory in their own way. But even further than the fatalities and facts, is the fear anti-semitism instills in New York’s Jewish population; especially the ultra-orthodox and Hasidic Jews, who are at the highest risk. The New York City mayor has recently announced that 100 security cameras will be installed in the neighborhoods of Orthodox and Hasidic Jews, to provide a level of safety. However, it is clear the upward trend of anti-semitic violence will not stop no matter the number of security cameras. The deep-rooted origins of this violence is hate directed at Jews, it is anti-semitism, which unfortunately, has no easy solution.

My grandmother, who grew up in Brooklyn, who tells stories of her childhood, is shocked to read the news articles of anti-semitism. It is undeniably difficult for her to imagine hate against Jewish people, her people.. And so, my grandmother proudly claims that “2 in 4 people in Brooklyn are Jewish” not as a fact, not as data, or a percentage of 50%. But she expresses this information as a wish, a prayer, a hope, a testament, a law, a memorial, a community, a people, a religion, a home, a light in the dark, a rose in the thorns, good in evil, life in death, togetherness, mourning, pride, and eternal devotion, in this belief she sees a past, a history, a present, a now, a future, but above all she claims a remembrance of the city she once called home.