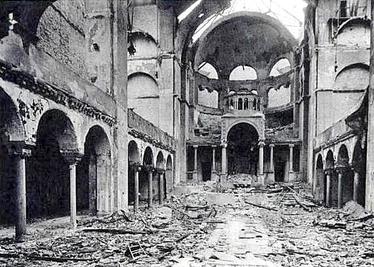 A meeting at the UN headquarters on Nov. 9th brought the word “Anti-Semitism” back to people’s eyesight. The meeting took place on the anniversary of Kristallnacht or “Night of Broken Glass”. The name Kristallnacht comes from the shards of broken glass and crystals on the street from the Jewish-owned buildings and synagogues that were smashed by the anti-Semitics on Nov 9-10, 1938 in Austria. While glass and crystals always symbolize beauty and innocence, it was totally not the case here, but the symbolization of “the end of the age of denial about the Holocaust.”

The origin of anti-Semitism can be traced back to the ancient Greco-Roman world when the basis of anti-Semitism is formed because of the religious differences. For example, during the 70 BCE, due to the refusal of Jews of the polytheism, they were segregated socially. In terms of the separation of Christianity and Judaism, it happened after the destruction of Roman when the Gospel changed to express Jewish culpability in the death of Jesus. Thus, Christianity became a so-called more “decent” and started to dominate the religious world in the Mid-West while Jews still insisted to practice their own rituals. In the churches’ teaching, the hatred and enmity of Judaism were expressed more frequently, describing them to be the companions of the Devil and a race of vipers.

In Medieval Europe, other religions’ opinions and treatment to Jews were complicated. There’s time when Jews were denied from human rights, barred from specific occupations like soldiers and governmental officials, accused of unfounded evidence and segregated from towns, which drove the Jews to move east. But when European commerce grew in the late Middle Ages, Jews started to become prominent in trade and economy. And they led a colorful cultural and intellectual life and it was them, who transmitted the intellectual heritage of the Classical world to medieval Christendom. The idea that the Jews were evil persisted during the Protestant Reformation(16 century) because of their rejection of Jesus.

In Modern Europe, Jews’ are at the start of the journey of being accepted. During the Enlightenment, although people still didn’t blame them for crucifixion any more, thinkers still blamed them for the advent of Christianity and for the injustices and cruelty committed by followers of monotheistic religions. The French revolution of 1789, Jews in France were freed and achieved some civil rights. But because of all these years’ condemnation, it was still common for people to consider them as an inferior group. In Russia, however, Jews were restricted into town which hurt their identities as rural traders, spurring the immigration of more than a million Jews to the United States over the next four decades and small immigration to western Europe. During the first 2 decades of the 20th century, there’s a moderate decline of hatred toward Jews but soon notably intensified by the economic and political dislocations of WWI. In WWII, the situation was even worse because of the Nazi’s unquenchable and unreasonable hatred towards them and that was the time “ Kristallnacht or “Night of Broken Glass” took place.

The UN Meeting on Anti-Semitism

In an intimate meeting in his office at UN Headquarters in New York, Mr. Guterres listened as Mr. Strauss recounted what it was like as an 11-year-old, to witness attacks and desecration of Jewish sites and monuments in Germany, and ultimately to flee the country. Mr. Guterres also encourages young people to learn about the histories of Jews because “If we hide the past, we will never be able to overcome it.”

We’re in an era with so advanced technologies that human has never reached before in the past that the progress of human’s thoughts can barely keep up with it. Nowadays, there are still people who deemed Jews to be the evil and show spite towards them. For instance, an anti-Semitic gunman went on the rampage in the US city of Pittsburgh, killing 11 Jewish worshippers in a mostly-Jewish suburb in Oct. 2018. It reminds me to think that it is human’s rights to choose which religion to believe in. And religions should be viewed as the crystallization of human wisdom from our ancestors and diversity of human culture after thousands of years of development instead of a difference and cultural gap between people. After all the things that human has been through in history, we need to understand that we are now creating a world where different people with different backgrounds can live together peacefully, where we can embrace the differences between people, where we are not judged by our backgrounds, where, according to Mr. Guterres, “Anti-Semitism needs to be fought as the crime it is” .