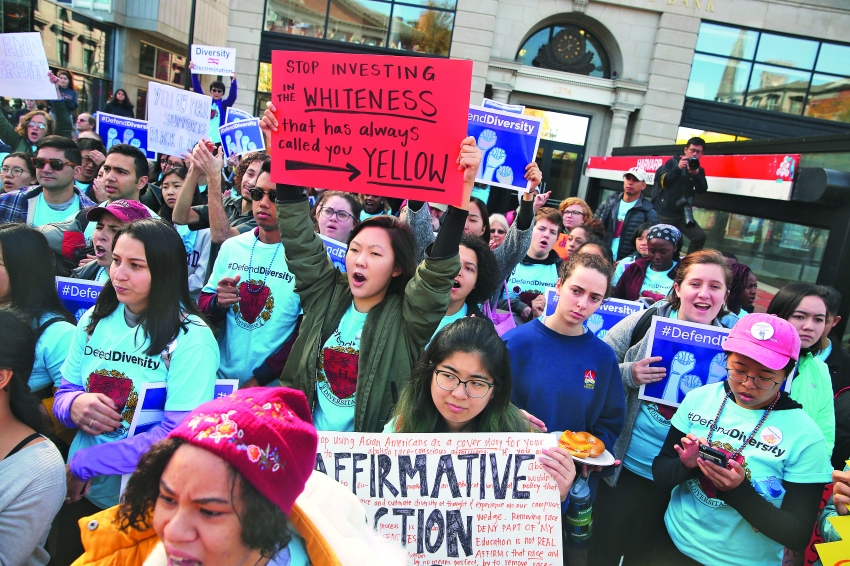 In wake of Harvard v. Students for Fair Admissions, which ruled that Harvard’s admission process was “a very fine admissions program”, many have raised objections against affirmative action again, arguing that the policy disproportionately harms Asian American students during the college application process. Some, including Students for Fair Admissions have even claimed that affirmative action in general can only harm the Asian American population. However, I strongly disagree. Affirmative action did not cause the Harvard story, and taking it away won’t solve the problem. While Asian American students do have to score significantly higher on the SAT than applicants of other races—140 points higher than White students, 270 points higher than Hispanic students, and 450 points higher than Black students (Espenshade & Radford 2009) —and racial discrimination certainly exists in Harvard’s application process, we have to realize that affirmative action mainly works against, not contributes to, large oppressive forces in society that keep all Asian Americans down.

Affirmative action is most frequently cited as the cause of racial quotas that colleges supposedly impose, which drastically restrains the number of Asian American students that are accepted into prestigious colleges. There are several things wrong with that assumption. First off, it’s illegal to impose racial quotas on college admissions. While Regents of the University of California v. Bakke allowed race to be a factor of college admissions, it ruled that racial quotas were unconstitutional. In their case, Students for Fair Admissions argued that elite colleges imposed a de facto racial quota through using double standards on standardized testing scores and arbitrary “personality scores” for applicants of different races. The stress, however, is on elite colleges only. A study by the National Association for College Admission Counseling found that race and ethnicity had “no influence” on two-thirds of colleges and serious influence for only 3.4 percent of colleges across the US. These findings make sense, as most colleges are non-competitive and consequently accept the majority of its applicants regardless of race. For St. Mark’s, where Asian students aim overwhelmingly for highly competitive colleges, race will play a factor in admissions; however, it is important to realize that not all Asian American students apply to or can afford competitive colleges.

While affirmative action is most commonly talked about in the context of education opportunities, it plays an even larger role in the employment and hiring process. Asian Americans who remain in the US after completing their college education and enter the local workforce experience a high level of racial discrimination. Research has found that while Asian Americans tend to graduate college at higher rates than other racial groups, employment outcomes are negatively influenced by race. While Chinese Americans show a consistent trend in doing well in employment, Indian and Korean Americans have equal chances as their white counterparts in attaining managerial positions, while Vietnamese or Filipino Americans are less likely to get these positions. Corporate managers often label Asian Americans as lacking in “social capital, cultural capital, personal connections”, which are institutional barriers much harder to remove and deeply rooted in oppression. Though we assume that a college degree education will bring more opportunity, racial discrimination will still cause corporations to favor white Americans with social and cultural capital over Asian Americans. While removing affirmative action may raise Asian admissions percentages in competitive colleges, it burns bridges for futures after college.

Finally, we must consider the holistic effects of taking away affirmative action, not just for Asian Americans. Another study by Espenshade with Chang Chung demonstrated that although removing affirmative action would raise an Asian applicant’s admission possibility from 17.6 to 23.4, it would cut African-American admission by two-thirds and Hispanic admission by half at competitive colleges where race is taken into consideration. Further removing diversity from institutions of higher education where the presence of African American and Hispanic students are already low only contributes to more racism and systematic oppression. Denying the need for affirmative action is denying the need for cultural diversity at the colleges we attend. In arguments for affirmative action, Asian Americans and our “model minority” identity have always been the dividing wedge. We must recognize that this is essentially allowing racism to go on, both against other racial minorities who have been benefiting from affirmative action, but also against Asian Americans themselves.

The class privileges many Asian Americans and international Asian students hold at St. Mark’s already provides a comparative advantage in the college admissions process by allowing access to outside resources. While we do not think about it, the prestige and opportunities attending St. Mark’s offers us already raises the chances of getting into a competitive college. Independently, we can access and afford SAT classes, outside counselors, and firsthand information about colleges. While angry at the racial profiling and racism that Asian Americans experience as the minoritized group, we must not forget the benefits bestowed by our class status either.

I am not supporting the court’s decision to drop charges against Harvard. Judge Burroughs’ explanation that teacher and guidance counselor recommendations may have been racially prejudiced, but “Harvard’s admissions officers are not responsible for many race-related or race-correlated impact that those letters may have” is a complete disregard of the racial prejudice occurring in the US against Asian Americans, and her argument that Asian Americans “did not possess the personal qualities that Harvard is looking for” is assumptive and poorly informed. I believe that the burden of proof should have been on Harvard to show that they are not letting racial bias influence their final decisions, and the statistically significant relationship of a racial gap between Asian American and white applicants should have been a smoking gun. However, racism, not affirmative action, is to blame. Blaming affirmative action will only pit Asian Americans against other minoritized races perceived to be taking their place, when we should scrutinize the white presence instead. And, though it seems to be all anyone talks about, life does not end after college. Those remaining in the states have a lot to benefit from affirmative action, and we must see that too.