For the past few months, Hong Kong has been going through one of the toughest fights against their own government to keep the city democratic by not letting the Extradition Bill, proposed by the government, pass. The consequence of letting the bill pass would eventually lead to local authorities being permitted to extradite criminal fugitives to wanted locations where Hong Kong currently do not have extradition agreements with- Taiwan and Mainland China. These ongoing protests have been growing in scale of both the number of participants and violence. Although these series of protests was entitled as ‘peaceful’, many protesters have contradicted their words and angered many by the increase of damage towards the city’s infrastructure, the use of force against the city’s police department and inconvenience for the city’s residents. 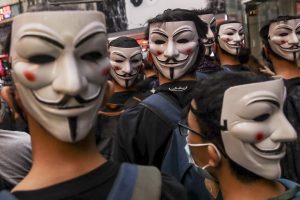 As of early October, the Hong Kong government announced the recent ban of mask use in the city in an attempt to diminish the lengthy protests; however, this only provoked protesters to introduce more protests against this new law last Friday. Hong Kong used the rarely used colonial-era emergency law which hasn’t been used since the 1967 pro-Communist riots against the British colonial government.

The latest protest included protesters illegally vandalising stores and shops thought to be pro-China and setting different areas of the city on fire. Later that night, it was also declared that the entire Hong Kong’s mass transit railway (MTR) stations have been shut down and will not run for awhile due to most entrances being caught on fire, leading to concerns of locals’ safety. During previous protests, it was seen that the police officers used rubber bullets to disperse the crowds of people; nonetheless, this Tuesday was the first time in the past four months where officers were seen using live ammunition. It was recorded that the victim was a 14-year old teenager and he was shot in leg and soon hospitalised. Additionally, more than 1,120 people have been injured, more than 2,000 arrested, thousands of rounds of teargas fired and two teenage students seriously wounded by live ammunition. At Sham Shui Po, a taxi-driver crashed into a crowd of anti-government protests which resulted in several injuries and raged masked groups who then grabbed the driver out and beat him unconscious. In addition, a TVB actress was caught filming protestors vandalising a bank in Mong Kok and so was beaten by the demonstrators.

Because of these protests, there has been a decline in tourists and the shutdowns of many stores, train stations, and banks until further notice causing a major effect on the city’s economic and social status. On top of this, shopping centres and restaurants close early and supermaket shelves are clear throughout the city.