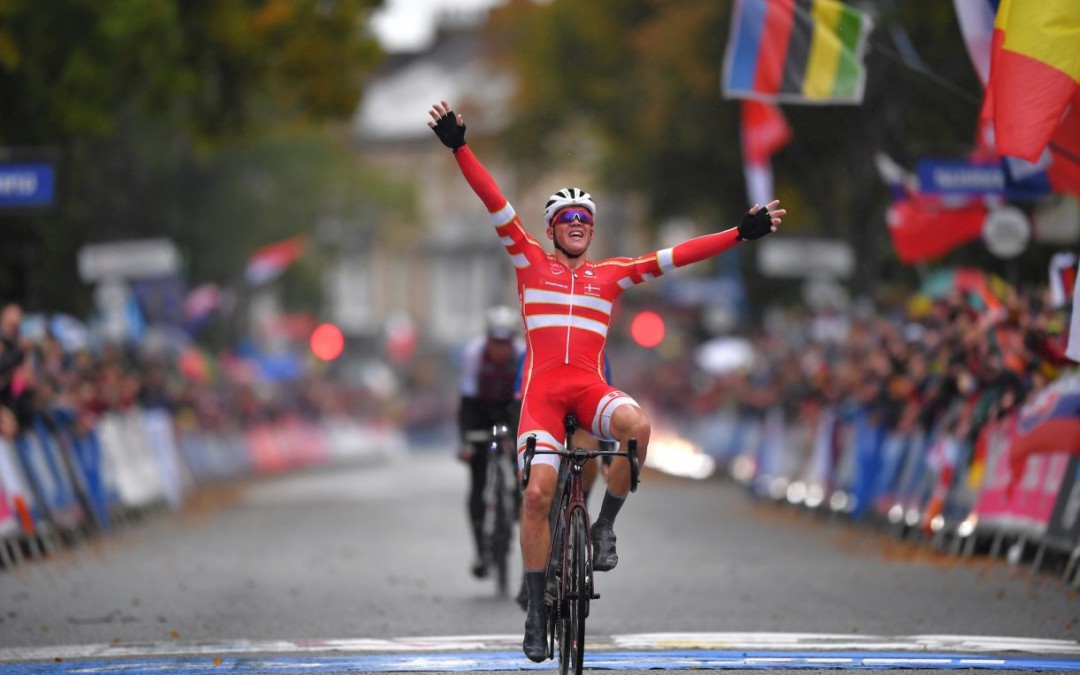 The Union Cycliste Internationale (UCI) Road World Championships were held this past week in Yorkshire, and they saw many extraordinary feats achieved and records broken in pursuit of the coveted rainbow bands denoting a world champion. Many storylines emerged from the eleven races that took place.

Taking the place of the trade team time trial, which had been the TTT event since 2012, the mixed relay event saw a return to national teams in the event, with ten nations and a compilation team fight it out on the streets of Yorkshire Sunday. With a men’s group of three leading it off for a women’s group of three, with times being taken at the second rider from each group to cross the line, it was only Germany and the Netherlands that seemed to send an A level squad. The host nation of Great Britain set the early benchmark. Their time looked in danger several times, most notably to the Swiss squad, however mechanicals and crashes ruined the Swiss’s chances. Great Britain remained on the hot seat until Germany, the second to last nation to finish, crossed the line, thus securing Team GB a medal and fending off the bronze medalists in the European Championships, Italy, by five seconds. It was the Netherlands however, that would go on to win the day, starting last and showing dominance at every intermediate checkpoint.

The Junior divisions of the Individual Time Trial passed rather anonymously Monday, with the Aigul Gareeva (RUS), Shirin van Anrooij (NED), and Elynor Bäckstedt (GBR) making up the women’s podium, and Antonio Tiberi (ITA), Enzo Leijnse (NED), and Marco Brenner (GER) making up the men’s podium. This anonymity would not remain for the U23 race on Tuesday. Torrential rain threatened the safety of the riders, however the organization decided that the race would proceed as scheduled. Hungary’s Attila Valter exhibited early just how treacherous conditions were. The video that would get the most circulation, however, was European and Danish U23 champion Johan Price-Pejtersen’s encounter with a standing puddle. Amongst this controversy, two time defending champion Mikkel Bjerg of Denmark made it his third victory, with the podium being rounded out by Ian Garrison at 27 seconds behind and Brandon McNulty at 28 seconds behind the winner, despite the latter’s close encounter with yet another puddle.

The elite time trials were wet, but not as much as that of the U23 race. The women raced Tuesday, after much of the standing water present in the U23 race had drained. Dutchwomen Anna van der Breggen and defending champion Annemiek van Vleuten set spectacular times, but were no match for the young American Chloe Dygert, who beat the former by 1:32 and the latter by an additional twenty seconds, setting a new record for the largest winning margin in a world championship time trial. The men’s time trial would follow a similar pattern, with Italian Filippo Ganna setting an impressive time, only to be usurped by the 19 year old European elite champion Remco Evenepoel from Belgium by 46 seconds. However it was defending champion Rohan Dennis of Australia, who, after a mysterious abandonment in the Tour de France due to disputes with his team over equipment followed by a lack of race days, demonstrated why he was the defending champion, beating Evenepoel by 1:09 on equipment provided by Cycling Australia, and not his Bahrain-Merida trade team.

Like with the time trials, the junior races passed without much drama Thursday, while the Men’s U23 race on Friday was marred with controversy. Megan Jastrob (USA) outsprinted a group of five in the Women’s junior race, followed by Julie de Wilde (BEL) and Lieke Nooijen (NED), while Quinn Simmons (USA) soloed to victory 55 seconds ahead of Alessio Martinelli, with Magnus Sheffield (USA) winning a four man sprint for bronze. The U23 race came down to a seven man sprint, won by Dutchman Nils Eekhoff. However, 15 minutes after the finish, video was presented to the race jury showing Eekhoff drafting off of the team support vehicles to rejoin the main bunch after a crash that dislocated his shoulder and put him off the back with 130 kms remaining in the 171 km race. The jury determined that his actions exceeded the normal allowable limit, and due to ambiguous language in the rule book, disqualified Eekhoff, making the new winner Samuele Battistella (ITA) in first, followed by Stefan Bissegger (SUI) and Tom Pidcock (GBR).

After a failed Dutch women’s title defense on Tuesday, the Dutch were determined to defend the title of Anna van der Breggen on Saturday. With 105 km remaining, the Dutch sent Tuesday’s bronze medalist Annemiek van Vleuten off the front to alleviate the impetus of the Dutch to set tempo, causing a split to form with van Vleuten solo with an advantage of about 45 seconds over a chase group containing Dygert, van der Breggen, and Spratt, who in turn had about 45 seconds over the peloton. Van der Breggen’s presence in the chase disrupted cooperation, causing the gap to van Vleuten to balloon to over 2 minutes with 30 kms to go, when Dygert attacked the chase in a bid to bridge solo, which shelled everyone else but Amanda Spratt of Australia and van der Breggen. Dygert took significant chunks from the gap to van Vleuten, but ran out of gas and was passed by the van der Breggen/Spratt chase. Van Vleuten took an impressive 105 km solo victory, with van der Breggen dropping Spratt for second, while Spratt held on for third.

The Men’s race set off on a miserable Sunday. Of 197 starters, 46 finished. An early crash saw Philippe Gilbert of Belgium amongst others hit the deck, aggravating a knee he broke a year earlier, and spending 19 year old phenom Remco Evenepoel on a failed chase effort, causing both to DNF. Defending champion Alejandro Valverde of Spain also fell victim to the weather, abandoning early. After the early breakaway was brought back relatively early in the race, a war of attrition ensued, broken by Lawson Craddock of the United States, who had finished sixth in the time trial Wednesday, and Stefan Kung of Switzerland, who had finished tenth Wednesday, with about 67 km. Mads Pedersen of Denmark countered twenty kilometers later up the Oak Beck climb, taking Mike Teunissen of the Netherlands with him. Pedersen bridged to the leaders up the climb, dropping Craddock, while Teunissen would eventually struggle onto the group to make it a trio, with Gianni Moscon of Italy following quickly in his tracks. Until this point, many of the pre race favorites had remained anonymous, but with 33 kms to go, Mathieu van der Poel, the odds on favorite for the Netherlands attacked, bringing the versatile sprinter Matteo Trentin of Italy with him. They bridged the nearly 30 second gap with relative ease, and began working well as a lead group of five. Behind, the strong teams of Belgium and France who were not represented in the front group began burning quality riders in a fruitless effort to bring back the lead group. With 12 kms to go, Mathieu van der Poel cracked, leaving Trentin with teammate Moscon as the fastest finisher in a group of four with a 50 second gap to the bunch. That gap would expand as Belgium and France’s resources were expended, and the new world champion was sure to come from the lead group of Trentin, Moscon, Kung, and Pedersen. Kung tried an acceleration over a small incline with 6 kms remaining, dropping Moscon, but Trentin and Pedersen were able to match him. The group headed into the final sprint intact, with the favorite being Trentin. Trentin launched his sprint with 200 meters to go, but it was Mads Pedersen who had the most left in what was a relatively slow dash for the line. Pedersen won, followed by Trentin and then Kung.