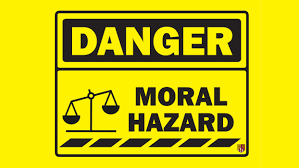 Moral hazard—the disincentive to protect against risks due to being shielded from the consequences—should definitely affect public policy.

When moral hazard encourages people to be reckless—be it by opioid users with access to Narcan or drivers with reliable car insurance—the simple solution is to eliminate the moral hazard. Unfortunately, this answer does not address the many complexities of moral hazard. First, moral hazard does not prompt everyone to act recklessly. Having fire insurance would not encourage homeowners to be flighty with open flames as plenty of people understand that burning one’s house down brings about a host of problems that cannot be solved by access to insurance. Thus, severely restricting the ability of insurance companies to forgive clients for accidents, while potentially effective for pyromaniacs, would be economically calamitous for most. With nothing to fall back on, a simple fender bender or a house fire could devastate a low-income (or even middle-income) person’s savings.

Furthermore, to assume that one could eliminate moral hazard by regulating insurance companies or limiting access to Narcan is a misconception. As long as economic inequality exists, moral hazard will exist. Even with less accident forgiveness, wealthy people will be more able to pay their way through car repairs and litigation than low-income people. Likewise, wealthy opioid users, even without access to Narcan, would be more likely to be able to afford addiction treatment than poor people.

Not all instances of moral hazard are the same. Car and fire insurance do not encourage people to act recklessly because the consequences of car accidents and fires are immediate, tangible, and affect the person with moral hazard. But when the consequences of an action do not affect the actor, moral hazard can encourage unethical behavior. People with money can afford to park illegally and litter at wildlife sanctuaries, as they can pay for the fines, but people with little money cannot. On a larger scale, residents of the United States can afford to emit carbon and contribute to climate change because the US economy relies less on a climate-sensitive ecosystem. Individuals in Belize and Bangladesh cannot. Thus, when people commit acts with long-term consequences—and take advantage of moral hazard in the process—the government must impose penalties.

An equitable society, rather than eliminating moral hazard, would distribute it equally for all when it comes to actions whose consequences are tangible and immediate. Limiting insurance companies’ accident forgiveness policies, for example, would just rob a safety net from the poor—leaving them devastated after car accidents. At the same time, it would allow the rich to take advantage of their inherent moral hazard. However, moral hazard, when it relates to actions whose consequences are long-term, like littering, must be eliminated. While fines are sufficient deterrents for low-income people, they do nothing to discourage bad behavior by wealthy individuals. Allowing a millionaire to pay the same fine for littering as a custodian—essentially, ensuring she does not have to endure the consequences of her actions—only invites the millionaire to take advantage of her moral hazard. Therefore, when a person exploits moral hazard, policymakers should adjust penalty fines for the individual’s income.

To better consider moral hazard in public policy, policymakers must distinguish between actions with immediate effects and actions with long-term effects. Equally important, policymakers must ensure that in distributing or curtailing moral hazard, they are doing so in a way that does not unfairly benefit the interests of certain groups over others.