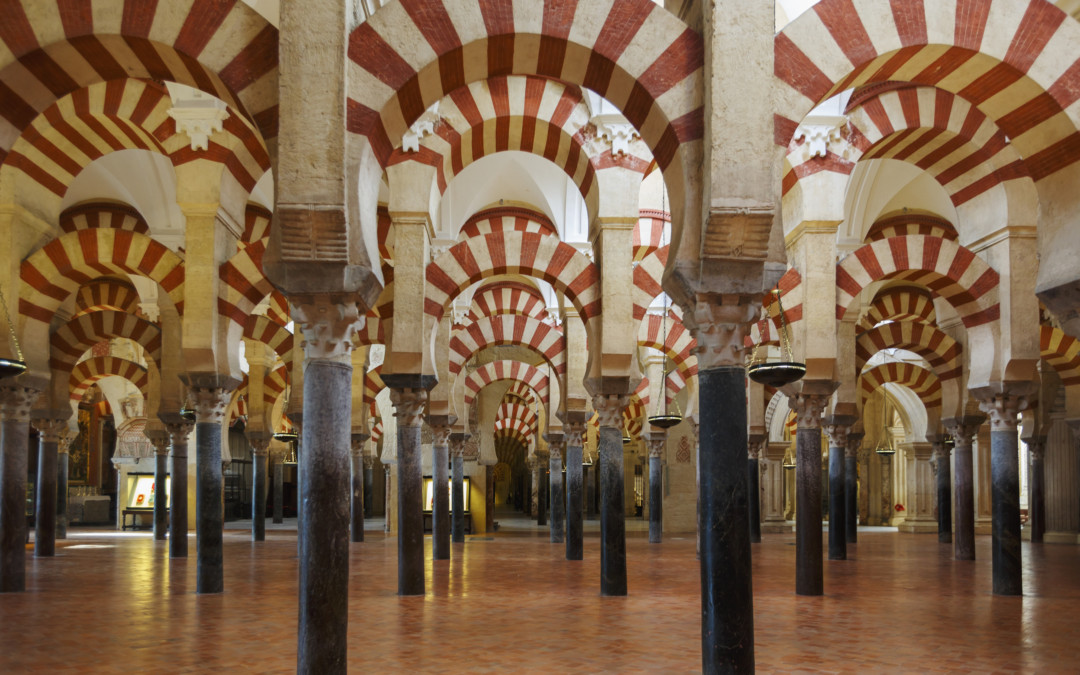 Constructed in 631 A.D. in southern Spain, the Great Mosque of Cordoba is an Islamic center for worship. Built in 1100 A.D. in Cambodia, the Angkor Wat is a Hindu temple dedicated to Vishnu. Upon first glance, the two buildings cannot be any more different: one is Islamic, the other is Hindu; one is in Europe, while the other in Asia. A closer look, however, yields intriguing comparisons. The Great Mosque of Cordoba and Angkor Wat are similar in that they both create a religious experience that evokes God’s transcendence and omnipresence. The two diverge in whether the holy is represented abstractly or concretely and whether the divine connection is communal or individual. The similarities result from the two religions’ alike images of God, while the differences arise from the contrast in the two cultures’ views on idolatry and two leaders’ political motivations.

Both buildings’ main purpose is to provide a spiritual experience by representing God. God in both Islam and Hinduism is transcendent, or above the human realm. Accordingly, the Great Mosque of Cordoba depicts God as a metaphysical being by using contrast to making the viewer feel small. As one walks into the large prayer hall, one feels dwarfed by the size and the quantity of the hypostyle columns. Tall double arches rise above the worshipper, while a forest of columns lay boundlessly before his eyes. The feeling of vastness is enhanced by the red and white scallop design on the arches, which make all of the columns blend together and appear to extend infinitely beyond. This inspires a feeling of awe in the viewer and reminds her of humans’ insignificance before God, creating a spiritual experience. Angkor Wat also demonstrates the divine’s transcendence by overshadowing the visitor with its sheer size. As one approaches Angkor Wat, the five towers loom close and the gigantic stone structure makes one cannot help but fall into worship. In addition to using size contrast, Angkor Wat also shows that God is beyond this world with the temple’s otherworldliness: 1200 square miles of intricate relief carving of stories from Hindu mythology cover the building. The scenes are full of elaborate, narrative details. These distinctly artificial surfaces contrasts with the building’s natural medium, stone, to make Angkor Wat and what it represents, God, stand out from nature. This other-worldliness furthers our image of God as outside of and above our world, making it a truly transcending being. Similarly, the Great Mosque of Cordoba also illustrates the supernatural nature of God through contrast. The mosque is in the center of the city of Cordoba, hidden among buildings with its rough, earth-toned exteriors. However, upon entering, one is flooded with colorful sights never seen in outside: the red and white arches, the ornate vegetal design, the perfectly constructed geometric figures, and the lavish gold and navy blue calligraphy. This immediately transports the viewers into another realm and, when contrasted with the inconspicuous exterior, show that the divine is in a level of reality above ours. Both buildings contrast the size of architectural structures with the size of the viewer and artificial with natural elements to illustrate God as transcendent. Their purposeful design successfully inspire feelings of awe and spiritual experiences.

Both buildings also describe God as omnipresent. The Great Mosque of Cordoba reminds the viewers of the presence of God by being located in the capital, the center of civic life. Its function is not unlike that of the Great Mosque of Djenné: the mosque ensures that God never leaves people’s line of sight even as they carry on with daily life. Similarly, Angkor Wat was also located in the capital of the Khmer Empire, serving as a reminder of Vishnu’s presence. On and within the building, Angkor Wat keeps God in its visitors’ minds by placing relevant imagery everywhere. For instance, miles of relief carving show scenes of mythology. One famous example is The Churning of the Sea of Milk, the Hindu creation story. The long relief show the Gods in a tug of war with the demons to release the elixir of life. The omnipresence of imagery for the divine remind the viewers of the omnipresence of the divine itself. Likewise, the Great Mosque of Cordoba makes God imminent by placing holy imagery of everywhere. Contrasting from Angkor Wat, God in Islam is not represented literally: instead of carvings of divine stories, God in Islam manifests himself in the vegetal arabesque, geometric patterns, and calligraphy. This is because of Islam’s iconoclasm, or opposition against idolatry. In fear of people starting to worship icons of the divine instead of the divine itself, in religious art, Islam forbids any idols, which include humans and animals. This is why patterns, instead of naturalistic visuals, are so common is Islamic art. Though the symbols in Cordoba are abstract, God is just as present there in Angkor Wat. The geometric patterns, which are the semicircles of the arches, the square and circles in the mihrab, and the octagon of the dome, are all mathematical representation of perfection. They belong to a higher, abstract world just as God does, therefore their presence evokes of God. In fact, it was discovered that though the mosque today is a rectangle, the original plan of the mosque was a square, further supporting the importance of geometry and the idea of perfection to this building. In addition to geometry, calligraphy in the Great Mosque of Cordoba also makes God omnipresent. The words written are words of God, so the content itself echoes the divine. The calligraphy’s flowing, aesthetic form also represents qualities of the Holy. The Arabic inscription woven around the mihrab seems to extend infinitely, representing the infinity and the beauty of God. In the Great Mosque of Cordoba, God becomes omnipresent by manifesting itself in the building’s geometry and calligraphy.

Though the Great Mosque of Cordoba and the Angkor Wat share religious imagery, they were built with different political intentions. Islam, as a religion, focuses on communal rituals. Abd al-Rahman, when he first arrived at Cordoba, discovered that Islamic worship was disorganized. As a result, he built the Great Mosque of Cordoba as a civic center to restore the rulership he had in Damascus and establish Muslim presence. Angkor Wat, on the other hand, was meant to be not communal but instead, individual as it honors Vishnu and serve as King Suryavarman II’s funerary temple. Though Angkor Wat’s specific use was unknown, it most likely did not serve as an organized center for worship as Cordoba did. As a result of one building being communal while the other being individual, the accessibility of the two buildings are different: Cordoba is connected with the rest of the city and open for prayer, while walls and a moat separated Angkor Wat from the rest of civic life, dividing the sacred from the ordinary. One should also note the structural differences in the two building: The Great Mosque of Cordoba has an axial plan pointing towards Mecca, while Angkor Wat has a central plan with five towers revolving around the center. This difference can be explained by the difference in religious practice. In Islam, the center of faith is always Mecca, so all mosques needs a qibla wall which points to it, making an axis planning with a long prayer hall facing Mecca more reasonable. In Hindu, however, there isn’t this rule in worship, so a central planning is sensible. Angkor Wat, in fact, was built as a model of the world in itself: the five towers physically represent the five sacred mountains in Hinduism and Buddhism. Since Angkor Wat is meant to model the universe, the building serve as the destination instead of as a vector pointing towards another end. This causes the divergence in floor plane.

The Great Mosque of Cordoba and Angkor Wat create similar religious experience in that they both use contrast and divine imagery to establish the transcendence and omnipresence of God. They differ in that one’s imagery is abstract, while the other’s is concrete. The communal versus individual nature of the buildings are also contrasting. By studying sacred buildings around the world, art historians discover what makes religions different and what makes the human faith all the same.