The Degrading Impacts of Victim Blaming 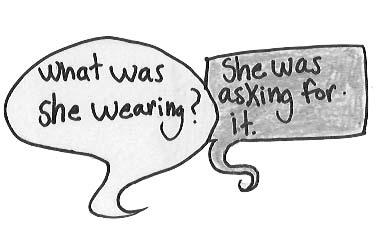 Across the globe, women are harassed and assaulted everyday, simply because of their gender. Among the the United States, this is common knowledge. However, what our country fails to recognize are the detrimental effects in the aftermath of violence. Specifically, the process of victim blaming, which is when a victim is blamed for the incident of violence.

Victim blaming occurs for many reasons, the most prominent being the rape culture of “She was asking for it.” This derogatory statement is used to blame gender-based violence on a woman’s clothes. Accusations against a woman, which criticize her role as a victim, cause stress on her mental state.

Another reason why many people blame the victim in a sexual harassment case is to identify the woman’s faults. With these differences in mind, people can assure themselves that they are unlike the victim and immune to violence. For example, women throughout the world may analyze a victim’s personality and assume they are different. This unhealthy response to violence convinces women that they will not experience the same fate as a victim.

Recurring crimes against women result in teenage girls who are told not to “get raped.” But how can you do that? How do you prevent yourself from being a victim? In schools, sexist and demeaning dress codes exist as a response to violence against women. Rules often force girls to cover their shoulders and wear long skirts, while no one protests the length of a boy’s shorts. Girls are told that the dress code restrictions are in place to prevent boys from being distracted by their features. This idea subtly implies that girls are the cause of rape by men. The act of dress coding a girl for being “distracting” is a form of victim blaming.

When girls are told what to wear and how to act because of violent men, it brings our society back to a time when women didn’t have any power and the world operated on misogynistic beliefs. However, in 2019, women do have power and there is no reason for victims to feel guilty for harassment. Regardless of a woman’s promiscuity, clothing, or personality, she is never at fault for a violent man’s actions. Girls should stop being taught that their choices influence a boy’s action. Instead they should be taught to take a stand against violence, join together, and build power.

Maybe then, when girls are taught to establish their own decisions, when women disregard the opinions of men, when victims are not blamed, maybe then, violence will end. Nevertheless, the single undeniable fact is as Aly Raisman expressed,  “Abusers, your time is up. The survivors are here, standing tall.”