The first successful test of the V2 rocket was in 1942, and it travelled 118 miles.  This was the first time the world had seen a ballistic missile.  The power and danger that this military capability contained was unmatched at the time.  If this technology wasn’t introduced so late in World War II, the face of the planet could be very different than it is now.

Here’s how the rocket worked.  It first traveled straight up about six miles.  It then continues on a arched trajectory, stopping its engine right above its target.  Because of this trajectory, it was all ost impossible to shoot down, and no way of warning citizens of its arrival.  While the engines are off, it continues straight downwards at upwards of 3,000 miles per hour.  The destruction created by not only the payload in the rocket, but just the sheer energy created with the high speed and large mass made a weapon that the world had never seen before.  The V2 rocket was launched successfully around 2,500 times, 500 of which hit London killing almost 3,000 people.

Part of what made the V2 rocket so revolutionary and important to space exploration was its ability to reach such high altitudes.  Using a mixture of water and ethyl alcohol for fuel, the rocket had the capability to reach 60 miles into the sky.  This is not too far from what is considered space, 62 miles or 100 kilometers above sea level.  The V2 was also the first rocket to successfully take pictures from this high of an altitude. One of these pictures is shown below. 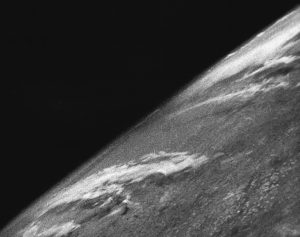 Despite the amazing technological advances of the V2 rocket, we can’t forget who was behind the design of it.  Wernher Von Braun was the lead engineer of the V2 rocket.  He was the leading Nazi scientist when it came to this field.  He was under heavy pressure to produce these weapons of mass destruction for the Third Reich. The catoried where V2 rockets were made used slave labor, and the conditions were so bad that tens of thousands of the workers perished on the job.  V2s were used to terrorize Europe towards the end of the second world war in 1944.  Von Braun was supporting the despicable desires of one of the most inhumane regimes in history.  While it is often disputed whether or not Von Braun supported the Nazi party, there is not question about his effect on modern rocketry and World War II.

As the Nazi regime declined, the United Stated and the Soviet Union pushed in on what was left of Germany.  Both sides had one goal, capture Wernher Von Braun.  They both knew how knowledgeable he was in rocketry and could not afford to be behind the other country in the aftermath of World War II.  Wernher Von Braun and some of his top engineers surrendered to the Americans in 1945.  He later signed a contract with the U.S. military to continue his work at a American facility in New Mexico.  Here he worked on re-creating the V2 rocket for the Americans.  He was successful in launching 125 V2 rockets.  He then moved to Alabama where he designed multiple successful ballistic missiles and rockets for the U.S. such as the Saturn V rocket and the Jupiter C rocket which was the first American rocket to bring a satellite into orbit.  He even had his own space television programs for Disney in the 1950’s.  Von Braun later became the head of the NASA Marshall Space Flight Center, and became in charge of the Saturn V program.  He later became one of the leaders of the Mercury-Redstone project that brought the first American to space, Alan Shepard.  Following President John F. Kennedy’s command to send Americans to the moon, Von Braun worked toward this goal until its completion in 1969 when Lance Armstrong and Buzz Aldrin set foot on the moon.

Wernher Von Braun had a significant impact on the course of space exploration.  Not only did he pioneer the first ballistic missile, he headed programs that brought Americans to space, and later the moon.  All of these achievements are outstanding, but we must not forget his roots as a member of the Nazi party.  Von Braun changed the course of space exploration forever, but not without the help of one of the most despicable and hated regimes in history.