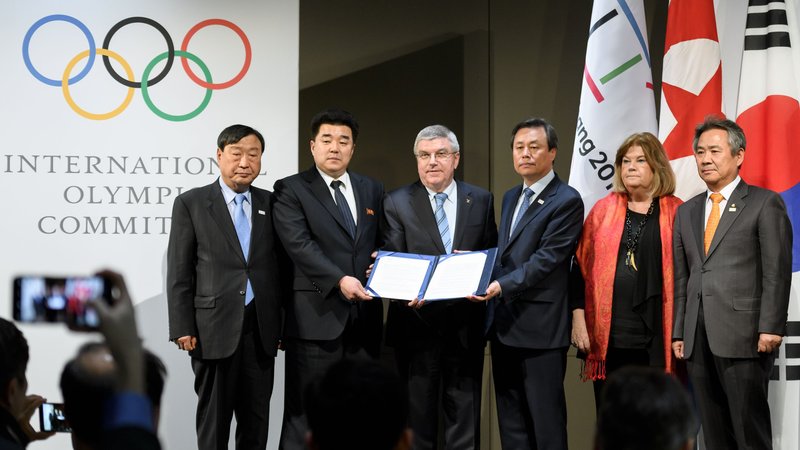 North Korea will send 22 athletes who will compete at the winter Olympics after talks were held between the two Korean officials and the Olympics Committee on Saturday. Athletes from both North Korea and South Korea will march under one unified flag at the opening ceremony for this year’s Olympic Games and will be competing together.

IOC president Thomas Bach released a statement on Tuesday announcing a agreement between the IOC, North and South Korea. “These proposals mark a great step forward in the Olympic spirit,” Bach said. He later went on to state, “”The Olympic spirit is about respect, dialogue and understanding,” Bach added following the announcement in Lausanne.

The athletes from both countries will be competing in 5 sports this year- ice hockey, figure Skating, ice Skating, short track speed skating, cross country skating and alpine skating. He also confirmed that for the first time in history, both North and South Korea will enter a combined ice hockey team under the name of Korea and a unified flag.

Bach later reiterated that the agreement was ‘not an easy journey’. However, it was one that he was very much proud of the two Korean countries, the IOC, and the Pyeongchang 2018 Organizing Committee achieving.

Many have since questioned the motives of both the IOC and North Korea, specifically how this would affect political tensions which are rising. Bach was quick to shoot down these claims saying, “The Olympic Games are always about building bridges, they never erect walls. The Olympic spirit is about respect, dialogue and understanding. The Olympic Winter Games Pyeongchang 2018 are hopefully opening the door to a brighter future on the Korean Peninsula and inviting the world to join in a celebration of hope.”.

The South Korean President has himself said “I will strive to make the Pyeongchang Olympics the ‘Peace Olympics’ and furthermore to peacefully resolve the North Korean nuclear issue so that this can be a year when peace is cultivated on the Korean Peninsula,”

These positive outcomes from Olympic diplomacy could serve as a opening dialogue that could go well beyond the games. It is certainly worth taking a look at how these talks could potentially impact political and diplomatic talks between North Korea and several countries. Most importantly, as US Undersecretary for public diplomacy put it, “anything that lowers tension is a positive development”.