I am an optimist. I believe in America and I believe that when America sinks to new lows, we can build ourselves back up again. It may be no surprise to most that I am not a fan of President Donald Trump. I was vehemently against his election, but once he was elected, I chose to remain optimistic. I thought that public office and more specifically, the highest office in the United States and the free world, would refine Trump into a more dignified man. I did not agree with many (note I did not say all) of his policies, but that is one of the things I appreciate most about the US – that we accept different ideologies.

After taking office, Mr. Trump has proved me and my optimism wrong. He has crossed line after line, lowering the reputation of America in the world each time. But on November 29, he crossed a new line. Using his personal Twitter account, the President retweeted 3 videos posted by Jayda Fransen, the deputy leader of Britain’s far right party, Britain First. 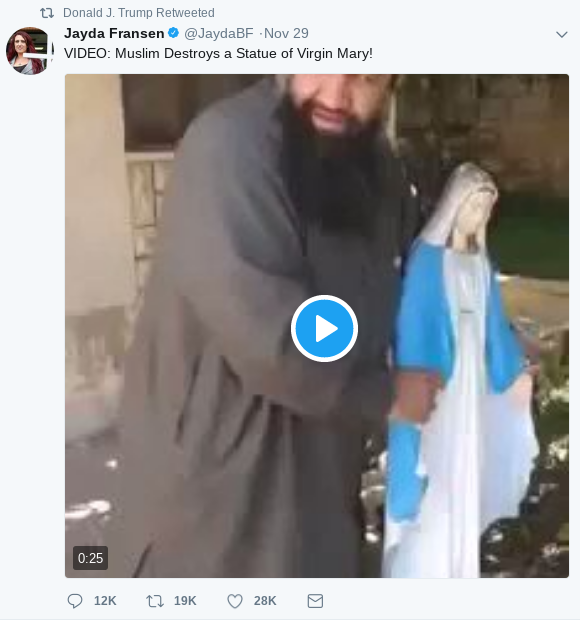 Once again, let’s remind ourselves that the person retweeting these videos is the sitting president of the United States of America, a nation founded on the belief in freedom of religion. Now, I know what some of you may be thinking: Didn’t we already know that Trump is racist and Islamophobic from his previous rhetoric? The answer is yes. Early on in his campaign, Trump called for a ban on all Muslims entering the United States. He has repeatedly stated the need to confront terrorist threats as “radical Islamic terrorism.” However, this is a new low for even Donald Trump. Here, he retweeted three hateful and inflammatory videos that have no basis in fact and which were originally tweeted by a woman whom most people in Britain despise. A spokesperson for UK Prime Minister Theresa May said that “Britain First seeks to divide communities through their use of hateful narratives which peddle lies and stoke tensions.”

I have long known that Donald Trump dislikes Islam. What I care about is how he shows it. Religiously-based immigration policies can be challenged in court. Trump’s tweets cannot. That makes the tweets even more problematic. By retweeting these disgusting videos which have nothing to do with Islam (sidenote for those skeptical: while these videos show disturbingly violent actions, those actions are not about religion or immigration. The people in the video are simply violent actors impeding on peace), Mr. Trump is reiterating his message that Muslims are not welcome in the United States, that this is a nation which does not believe in freedom of religion, and that this is a country where our president openly states these things.

These tweets fueled up anger and disgust in me, compelling me to write this piece. I realize that I fail to offer much insight on the situation, but that was not the point of this rant. I simply needed a platform to voice my frustrations and utter disgust at these specific actions that the American president is undertaking. Indeed, I think that is what speaks volumes about the presidency of Donald Trump – that me, an optimist (and let me say once more, I continue to remain positive about the future of this country) could be so appalled by what should be small things, such as tweets, that I am forced to write 600 some words incoherently put together against him.

Americans need to stand up against this president and his hateful, unAmerican, and unconstitutional ideas. Freedom of religion has been a hallmark of American democracy for over two centuries. While Mr. Trump may not believe in the ideals of freedom and liberty, the American people most certainly do. So, do your job. Participate in your democracy. Elect leaders whom you can be proud of. And when you are not proud of them, hold them accountable.