The Next Cold War?

Perhaps the recent unveilings of clandestine activity in Russia, the controversial raid in Yemen, and the travel ban have distracted the populace and the administration from one of the most sensitive yet crucial issues of modern foreign policy: the proliferation of weapons of mass destruction, or WMDs, namely nuclear arms.

Following the discovery of the true power of the atom, scientists began to dream of harnessing their energy. Although nuclear energy introduced a sustainable alternative to fossil fuels, the desire for military intimidation drove the world to a nuclear arms race. This global battle for the upper hand launched the Cold War, a decades long standoff between the United States and Russia. Paranoia and fear of mass destruction ensued as the world watched the two nations in a nuclear deadlock. After Japan’s attack on Pearl Harbor in Hawaii, the United States dropped the only belligerent nuclear bombs in world history on the Japanese cities of Hiroshima and Nagasaki. Between these two nuclear attacks, the death toll exceeded 200,000. After this, the diplomatic concept of mutually assured destruction prevented a bona fide nuclear war.

As the Cold War became publicly recognized a shamed period in American and world history, fear of mass destruction dwindled. However, a cooperative global effort to continue the nonproliferation of WMDs has remained.  Worries over the current president’s discretion have risen since his campaign as the commander-in-chief possesses the executive prerogative to use nuclear weapons. Furthermore, Donald Trump’s volatility, coupled with his troubling statements regarding the use of WMDs, has raised legitimate concern.

A Background on the Issue of Nuclear Weapons in the United States in the 21st Century: 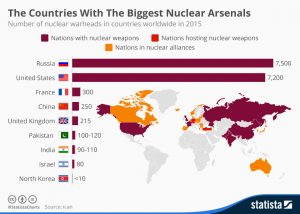 A chart depicting the size of worldwide nuclear arsenals, via The Independent

The United States negotiated a comprehensive deal with Iran by increasing oversight of Iranian nuclear plants and limiting uranium enrichment in return for reduced sanctions. Likewise, the 2011 START treaty seeks to increase transparency and decrease proliferation of arms between the United States and Russia (“START”).

In spite of America’s efforts to reduce proliferation of nuclear arms, nuclear modernization has come into the spotlight as a primary issue in the realm of WMDs as the United States’ nuclear arms have aged. The cost of nuclear modernization could exceed $400 billion according to former Defense Secretary Ash Carter, but other estimates predict the price tag to be $1 trillion (Mosher). A more comprehensive estimation of the cost of the decades long project can be seen here.

The Arms Control Association has outlined the thirty year plan of the United States, prompting the Association to call [the plan] “unrivaled by any other nuclear power”(Reif). However, Business Insider’s Dave Mosher states that the new program can “improve reliability…lower the risk of malfunctions, and actually reduce the number of deployed, ready-to-go weapons”(Mosher). As the technology of nuclear arms has become accessible for developing countries, the plan of nuclear arms in the United States may impel nations that are currently not in possession of nuclear arms to desire them.

Furthermore, global frustration over the seemingly unchecked global power of the United States could heighten with this new modernization program. Thus, countries wanting to gain recognition as a military force may be compelled to construct nuclear weapons as the United States refurbishes its nukes. On the other hand, America’s possession of nuclear arms has upheld the international agreement of mutually assured destruction, and losing these arms may compromise the country’s global influence. Russia would presumably become an international bully, recklessly intervening in conflicts with their increased influence.

How Donald Trump Will Deal with Nuclear Arms:

On December 23, to Mika Brzezinski, co-host of MSNBC’s “Morning Joe”, Donald Trump said, “Let it be an arms race,” and later, “We will outmatch them at every pass and outlast them all” (Pilkington and Pengelley). This statement alone may serve as an impulsion for fearful countries to ramp up their nuclear arsenal, an even stronger provocation than the $1 trillion expansion of nuclear arms that Barack Obama had approved. Consistent with the theme of global dominance, Donald Trump had tweeted the day before, “The United States must greatly strengthen and expand its nuclear capability until such time as the world comes to its senses regarding nukes” (Buncombe). This statement, a blatant incitement to nations to expand their nuclear arsenal, stands in sharp contrast to the nonproliferation stance on nuclear arms that Barack Obama took at the beginning of his presidency. Although the 44th president did support the nuclear triad program, Barack Obama understood that Trump-esque bluntness in regards to nukes only encourages countries to strengthen their nuclear weapons program. 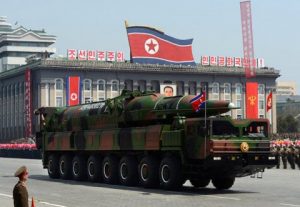 A military truck carrying an intercontinental ballistic missile in Pyongyang, via Business Insider

Consistent with the notion of “America first”, Donald Trump has always had a distaste for international organizations and agreements, disparaging NAFTA, the Trans-Pacific Partnership, the World Trade Organization (WTO), and the United Nations. The United Nations, since its inception in 1945, has been one of the strongest proponents of nuclear disarmament. A July summit at the UN introduced a new treaty that prohibits the possession and use of nuclear weapons across the world. Although it was met with harsh opposition by nations including the United States, this treaty may be the beginning of a legitimate international cooperative effort to truly end the proliferation of nuclear weapons (Helfand). Of course, Donald Trump recently signed an executive order to reduce funding to intergovernmental organizations including the UN (Revesz). This divestment from the United Nations will certainly compromise the United States’s ability to resolve international disputes and will particularly limit America’s involvement in the nonproliferation of nuclear arms.

During his campaign and after his election, Donald Trump mentioned that the inevitability of nuclear proliferation makes it futile to try to limit it. In almost all aspects, Trump has maintained a nationalistic attitude, espousing the “America first” belief (Gerzhoy and Miller). In the realm of WMDs, the idea of “America first” will have specific ramifications. By reducing global involvement in the maintenance of peace, the United States will lose its influence in curtailing nuclear armament. Coupling this non-interventionist attitude with the plan to greatly expand America’s nuclear arsenal, Donald Trump is almost asking for another Cold War. Crippling the U.S. from being able to mitigate such a nuclear standoff, as Donald Trump would intend to do, could cause a legitimate nuclear war.

Although the concept of American Exceptionalism has mostly been a cause of global calamity, there is one positive byproduct of this otherwise repugnant notion: the idea of the American responsibility. As a wealthy, resource-rich, developed country, the United States has a responsibility to practice good diplomacy by intervening peacefully to resolve conflicts. Ignoring this responsibility could exacerbate global conflicts that eventually could harm the wellbeing of the United States. So much for “America first”.

Is there cause for concern? The answer to that question is most definitely yes. Contradicting my prediction, Donald Trump has yet to yield to the establishment, breeding increasingly intense contempt among the Republican Party. The only hope is that the experience and tact of the executives in the State Department will prevent a Trump disaster before it occurs.