How Trump Won the Rust Belt 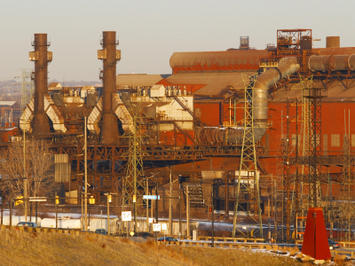 In the aftermath of the 2016 presidential election, one question that many still ponder is just how did Donald Trump manage to win the Rust Belt region: specifically the states of Michigan, Pennsylvania, and Wisconsin? This question is justified- these three states have all remained blue since the 1992 election which Bill Clinton won. On top of that, nearly every electoral vote prediction had Hillary Clinton taking the three states. So just how did Trump manage to steal these three states from under Clinton?

First, it’s important to look back on the history of the Rust Belt. The Rust Belt gets its name from its industrial past, largely in steel and car manufacturing. It was considered the heart of industrial work in the United States, and this created many blue collar jobs for citizens of this region. However, in the 1970’s the steel industry in the U.S. began to die. Before anyone could do anything, factories were closed, jobs were destroyed, and many blue-collar workers who had made their lives off of this industry were left wondering what to do next. The economy of the Rust Belt collapsed, and this region that had once promised well-paying jobs to thousands of people was transformed into a place of lost dreams. This economical turmoil in the Rust Belt didn’t just appear and go away- it still ripples into today. For example, Detroit, once known for its car manufacturing, is still struggling economically today.

Detroit in the 1930s via nydailynews.com

These economic circumstances have created an area of people all dreaming of change and getting back to the way life once was, when they were happier and had well-paying jobs.

Donald Trump’s campaign focused heavily on these same kinds of concerns. For example, Donald Trump’s campaign motto “Make America Great Again” is a summation of these feelings- the desire to be successful again, to have jobs again, to achieve the American Dream. Trump built his campaign upon appealing to the dissatisfied people who had lived in an economically unstable area for decades. He tried to give them the hope that, with him in office, they could flourish once again. It apparently worked. Trump was able to win the popular vote in all of these states, giving him a sizable number of electoral votes, which ultimately helped him massively in winning the entire election. In fact, some political analysts attribute his win to these states.

It will be interesting to see in 2020 if the Democratic Party is able to win back the Rust Belt, or if the Republican Party will be able to hold onto it again. A lot of this relies on what Trump does in his presidency- will he be able to fulfill the promise of creating jobs in the Rust Belt, or will this all turn out to be a case of misplaced hope? Only time will tell, and it will be interesting to see what happens as we head into this next controversial presidency.

If you want to read more on how Donald Trump was able to win the election, check out Matt’s article here.