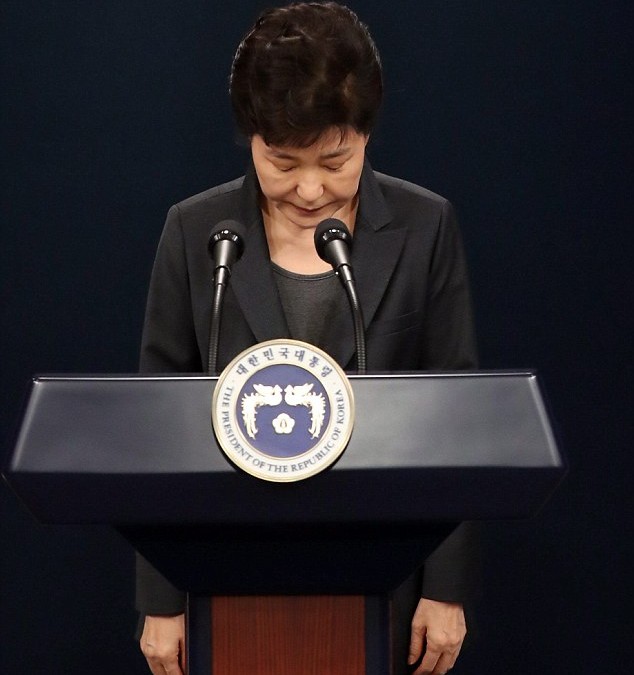 Whilst the election is approaching here in America, a news report triggered an earthquake throughout Korean political society, bringing some shakes to the long-established political structure there.

Park Geun-hye, the current president of South Korea, is being accused of leaking confidential information to Choi Soon-sil, who served as a consultant of Park while holding no official government position. Through an investigation in late October, the procurators found that Choi was in the possession of multiple presidential speeches, of which she appeared to be the editor, that involve top national secrets. Park and Choi were also accused of embezzling funds throughout the establishment of Choi’s two non-profit organizations. Additional public anger was raised when it was later revealed that Choi’s daughter, Chung Yoo-ra, was accepted into Ewha University, one of the most prestigious institutions in Korea, through a shady process of preferential treatment. The president of Ewha University was forced to resign following demonstrations by the students and faculty. When media reports were initially released Chung Yoo-ra fled to Germany, however she has returned to Korea and is currently under arrest. 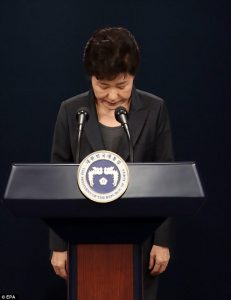 Park’s relationship with the Choi family was a controversial issue even before Park became the president. Choi Tae-min, the father of Choi Soon-sil, became close with the then immature Park Geun-hye, who was recovering from the assassinations of both of her parents when she was 22 and 27 years of age respectively. The elder Choi served later as Park’s confidant and mentor while she rose up from an Assemblywoman to the head of GNP (now known as the New Frontier Party), the largest political party in Korea, and eventually became the first female president of South Korea. Park’s relationship with Choi Tae-min was naturally carried on to the latter’s daughter, the center of the scandal, Choi Soon-sil.

So far, President Park has appeared on national TV twice to apologize for her involvement, but her repentance did not prevent widespread protests across South Korea. As of November 4, her approval rating in Korea has hit an unprecedented low of 5%. 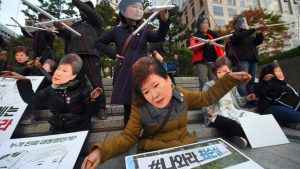 In reaction to the crisis, Park Geun-hye has made several moves in the government. Hwang Kyo-ahn, the prime minister of Korean government, was fired along with members of the secretary council to the president. Park is in the process of choosing Hwang’s successor and is reportedly planning to release her charge of domestic affairs to the new prime minister, while she will only focus on foreign issues and military.

This series of political scandal has triggered Korean society’s discontent towards corruption in politics. Korea was long affected by high-level corruption, but none of the previous scandals has been as severe as this case. Choi was not only accused of in embezzlement but also interfering policy making, which was unprecedented. The long-existed intimacy between political leaders and financial groups in Korea has thus reached a new level. Luckily, Korean society is proud to have media that pay high respects to transparency and democracy. It is the media’s adherence to independence, social responsibility, and principles of news reporting that prevent the institutional and personal corruption within Korean government from further damaging public and national interest.

Read more about the Choi Soon-sil Scandal at: