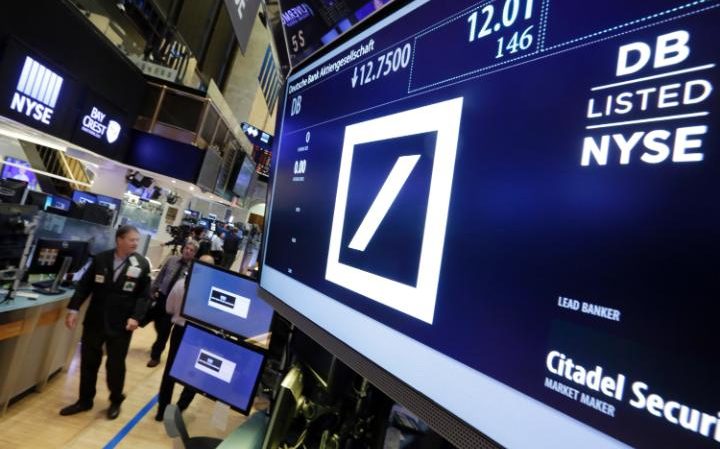 On Monday, Deutsche Bank (DB.N) shares fell again after the German bank failed to reach a settlement with the United States Department of Justice over a 14 billion-dollar fine. The bank is being fined for mis-selling mortgage-backed securities and is trying to reach a settlement for the fine before the U.S presidential election this November. Previously, Deutsche Bank and the DoJ (Department of Justice) were close to agreeing on a 5.4 billion-dollar settlement for the fine.

Deutsche Bank, a bank based in Germany, is much smaller than its Wall Street counterparts such as JPMorgan and Citigroup, however it remains the primary distributor of loans in Germany. In fact, the International Monetary Fund (IMF) discovered that the bank plays a more significant role in the wider financial system than any other bank in Germany.

To make matters worse, Deutsche Bank has a market capitalization of only 17.9 billion-dollars from which it will have to pay the heavy multi-billion dollar fine, meaning that the bank will likely have to find alternative ways to pay the full DOJ demand. According to the Deutsche Bank, the German government currently does not have a plan to bailout the bank even if they are required to pay the full 14 billion-dollar fine. However, because of the steep repercussions that the fine can have on Deutsche bank and global markets in general, there are already government individuals that are pushing for such a bailout. For example, Wolfgang Gerke, the Bavarian Finance Centre’s president, says that the German government should buy 20% stake in the bank before the value of the bank’s value plummets anymore.