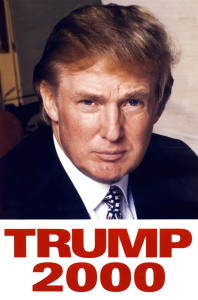 Many people are not aware of Donald Trump’s past experience with Presidential campaigns. Trump actually was considering, and preparing to run, for President in 2000. He would not run under either of the two main parties, though. He intended to run as the nominee for the Reform Party, a political party that gained traction as a viable alternative to the two main parties in the 90’s, following Ross Perot’s strong run as an independent. 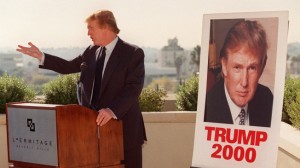 Trump addressing a crowd in the preliminary     stages of his 2000 campaign.

Perot established the party as a centrist party in 1995 with a focus on anti-corruption. He focused on issues that were largely ignored by the other parties, such as the national debt and campaign finance reform. Interesting now is that candidates like Donald Trump and Bernie Sanders have gained popularity for talking about how campaign finance is a broken system, which has been an issue that, unsurprisingly, has gone under the radar.

Donald Trump intended to run for the party’s nomination in 2000. His main opponent was Pat Buchanan, who Trump denounced as a “Hitler-lover” on the grounds of anti-semitism. If one thing hasn’t changed, Trump still likes to add insulting epithets onto his opponents. His run was short-lived, because the Reform Party faced internal conflict and was becoming dysfunctional, making it seem unlikely for Trump to score a General Election success under the Reform title. Ross Perot, the founder of the party, also endorsed Buchanan, which more or less removed Trump from the race.

Trump’s policies included implementation of single-payer health care, maintaining capital punishment, and preserving fair trade. Consistent with his current run were his policies on border control, although the wall is a new concept, increased military spending, opposition to NAFTA, and increased pressure on China. In regards to campaign strategy, in an interview with the LA Times, Trump said “”The only strategy is, I’ll be on television a lot. I’ll be expressing my views. I’ll be explaining that I don’t want foreign countries to rip off the United States, like they have been doing in the past”.

There are many fascinating things about this proposed campaign that never reached the primary season. Trump proposed Oprah Winfrey as his Vice President, and John McCain as his Secretary of Defense, who he recently took jabs at, even if they were slightly sarcastic. Again, he was willing to self-fund his campaign. It is surprising that Cruz and fellow Republicans are not willing to bring up his history with the Reform Party, because it shows that Trump is far more moderate than he portrays himself to be. The Reform Party platform also is fairly consistent with some of the policies Trump has put forward.

His 2000 Presidential run begs the question: How much has The Donald really shifted? While his positions are not clear, his 2000 book outlines his positions in great detail and he does not align closely with the Republican platform. There is no doubt that if there was a viable center-leaning third party, he would be running for their nomination. But there is more than enough evidence that a third party candidate has no chance in the United States, which is why both Trump and Sanders have ended up running Republican and Democratic respectively. Heading into the general election, in which Trump may very well be the Republican candidate, how much will Trump shift? We’ll have to wait and see.