Daniel Johnston and Living With Schizophrenia 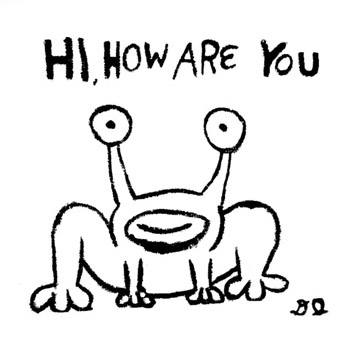 Earlier in the year here at St. Mark’s, Dr. Elyn Saks came to speak about living with schizophrenia. She described her experiences in brief: horrifying hallucinations, not knowing what’s real and what isn’t, and psychotic episodes. Dipping into psychosis, she had stages of her life where she was locked up in mental wards. This spring break I opened the copy of The Center Cannot Hold, Dr. Saks’ book I picked up from her presentation, and read some of it, though not as much as I would have liked. Schizophrenia is terrifying, dangerous, and utterly fascinating. 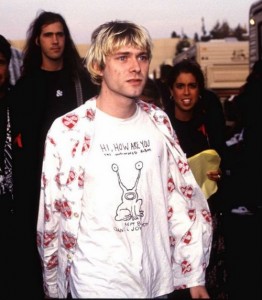 You may have seen this shirt before.

The shirt in the picture may look familiar. It is Kurt Cobain of Nirvana, wearing the album cover to Daniel Johnston’s album Hi, How Are You. Many people recognize, and some may own the shirt, without even knowing the actual significance of it. Daniel Johnston is an artist who has schizophrenia as well as bipolar disorder, and his albums and songs hold the experiences he has undergone. He has published many albums, and has his own style. His lo-fi recordings range from pop-sounding music to simple folk music. Some songs are sweet, and some are absolutely gut-wrenching.

Reading accounts of schizophrenia is interesting, but experiencing it through music is a new medium in itself. It is just as confusing as one might expect, but the same themes keep occurring. The Devil. Satan. Casper, the Friendly Ghost. Johnston’s music helps make some sense of what’s happening inside his head, and the pain that schizophrenia has caused him.

It may not be your kind of music, but even if it isn’t it is an experience in itself. I recommend spending 5 minutes to listen to some of his songs. Most famous of his songs is his short, sweet, sad tune “True Love Will Find You In The End.” Many artists have paid homage to Johnston and made covers of his music, many of which are interesting takes on his music. But none carry the emotion and meaning of the originals, that capture schizophrenia in the form of music. It is fascinating stuff, and I have utmost respect for anyone who has to live with any kind of mental illness.