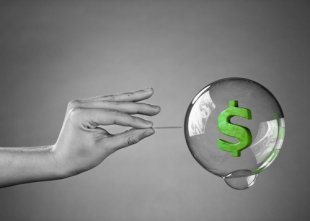 The financial bubble is a situation in which prices for securities, especially stocks, rise far above their actual value. A bubble usually occurs when investors either anticipate the demand of a stock to be increased, or the stock will become profitable in a very short period of time. Because of the bubble, the price of the stock becomes inflated. In addition, the financial bubble is an enigma to most, because it does not have many proven causes. Although, financial bubbles have caused many financial crises. 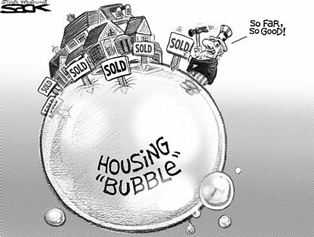 In the housing market, many who own inflated assets, invest in more expensive houses. They decide to buy a more expensive house because they think they can sell it for a higher price. This is known as the wealth effect. When the bubble inevitably pops though, the instant wealth of these investors diminishes. Because of the lack of wealth for these investors, they temporarily reduce their spending, which hinders economic growth. A quote from Justin Fox, a financial journalist and a writer for the Harvard Business Review, is quoted to have said, “Bubbles arise if the price far exceeds the asset’s fundamental value, to the point that no plausible future income scenario can justify the price.”

Financial bubbles have occurred both in the far past and in our present today. One of the most well known and recent situations was the Housing Bubble, which spanned from 2001-2006. One possible cause of this economic bubble occurred due to the excessive loans that banks were giving to people without proof of income. Rob Shiller, winner of the 2013 Nobel Peace Prize in Economics, predicted in his book, “This is the biggest boom we’ve ever had. So a very plausible scenario is that home-price increases continue for a couple more years, and then we might have a recession and they continue down into negative territory and languish for a decade.” Unfortunately, Mr. Shiller’s prediction was quite accurate. In turn, the Housing bubble caused the housing market to crash from 2007-2010. Regardless of the cause of these bubbles, it is clear that financial bubbles are detrimental to any country’s economic growth and the lives of its citizens.