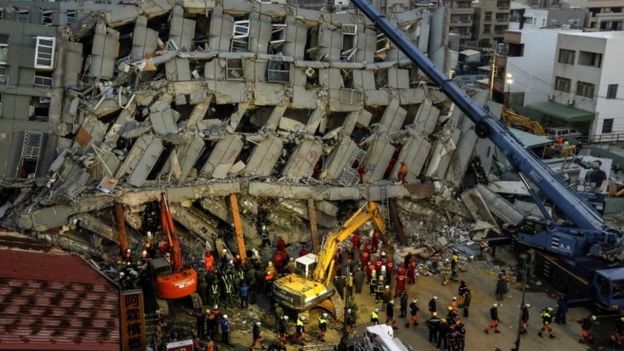 Various sources report differing fatality and injury counts, but around 30 died and over 500 were injured. Under a collapsed high-rise building, many remained trapped for over a day. The city of Tainan was hit worst, though aftershocks could be felt in other areas as well. Taiwan is currently celebrating their Lunar New Year, so it is the equivalent of an earthquake during Thanksgiving, or Christmas in the United States.

Taiwan sits near where two tectonic plates – basically, plates of the earth – intersect, and often feels small tremors. Yet it has not had a large earthquake in the last 16 years, with the last large earthquake occurring in 1999, with a magnitude of 7.7.

The reason for most of the deaths in this earthquake came from the collapse of high-rise that collapsed in on itself. Despite Taiwan’s geographic vulnerability to tectonic vulnerability, many buildings are not built to withstand earthquakes. I would be willing to wager that a city like Boston would fare better than many places that are more likely to have earthquakes, simply because of tougher enforced infrastructure standards. In third world countries, many buildings do not follow code, as doing so would mean increased costs of building. It is far more cost effective to build with cheap materials and methods that favor speed over quality, so urban areas can be quickly developed. In first world countries, infrastructure is made to last and must follow a strict code that ensures structural soundness. The earthquake of 7.0 magnitude in Haiti in 2010 was so deadly, even though it was marginally stronger than the one in Taiwan, because of the infrastructure in Haiti. Haitian infrastructure was not built to withstand earthquakes, and as a result many more buildings collapsed than they did in Taiwan. But in first world countries, earthquakes are less of a worry, though certainly on fault lines they still are.

The moral of the story is, if you’re looking for a house in an area with tectonic activity, and you’re getting a suspiciously good deal, you might want to do your research.